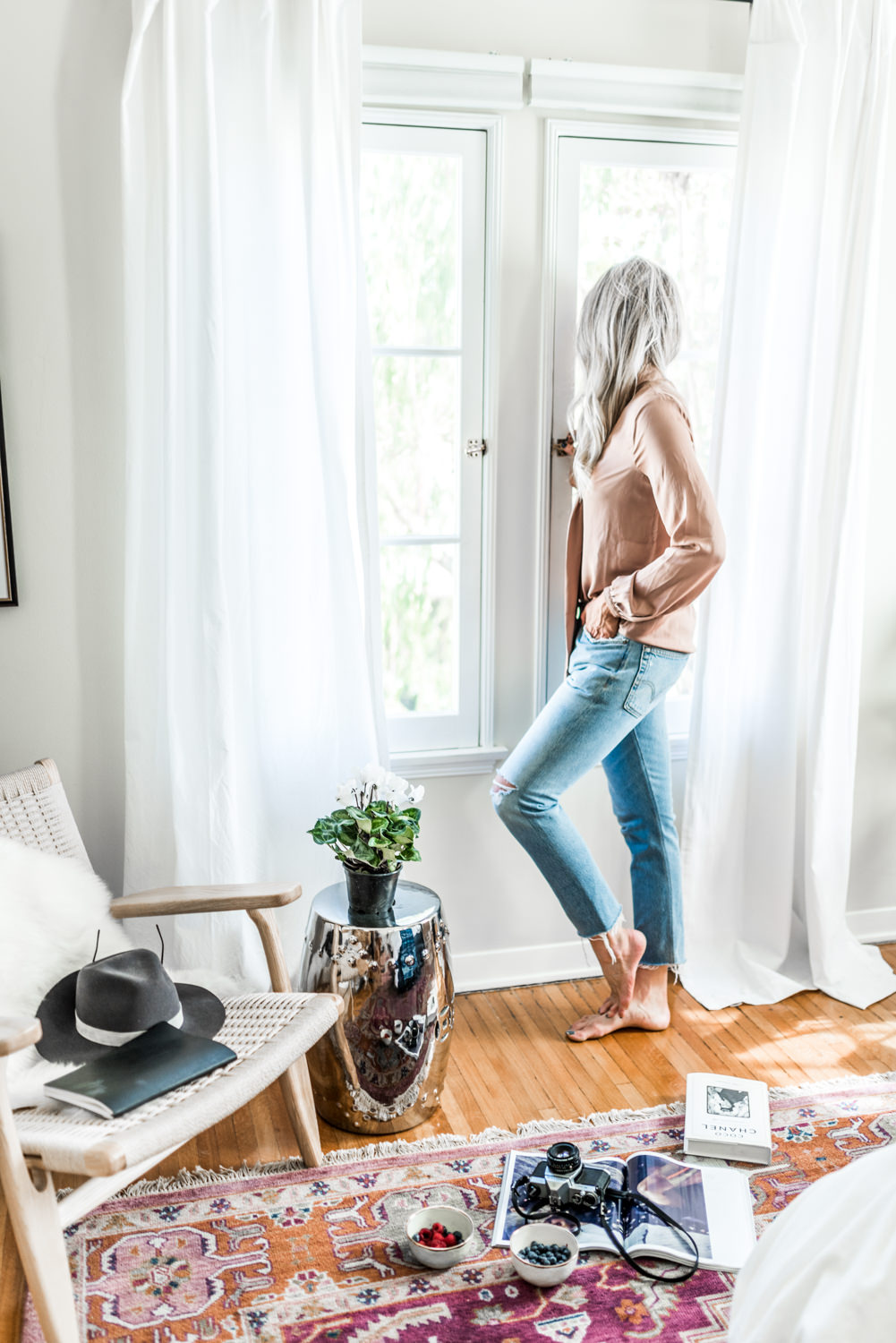 A few years ago, I was walking down the street on a warm summer day, talking to someone on the phone. She asked how dating was going after yet another breakup and I let her know I made the decision to take a little break. To use that summer to focus on my friends, work, and enjoying the city when it’s not freezing. Much to my surprise, I was given a lecture about how I didn’t have time to do that or I’d end up alone. Ok then. My graphic design business didn’t exactly thrive and The Everygirl wasn’t understood by most people for years. Can’t tell you how many times I was asked “wait, so how do you make money?” But it’s not about what everyone thinks. It’s time to stop living up to other people’s expectations. And here are a few things you can to do feel better today.

It’s so easy to get so wrapped up in trying to be enough for everyone else that you begin to forget about what you want. Living up to other people’s expectations can vary from not seeming like a big deal to feeling immense amounts of pressure to have a career and life your parents are proud of. Can I take a break from dating? Is my career path a huge mistake? Is something wrong with me? When you stop listening to everyone else and start following the path that feels right for you, there’s a shift. Chances are it won’t be perfect and might be a longer journey to get to where you want to go, but ultimately, I’ve found that the people I know who are doing what they want to do are much happier than the ones living for other people.

Here are a few things to consider.

Your Happiness Should Come First

Being a good daughter, friend, girlfriend, wife, or mother is important. And there are times you have to prioritize your family or career, but women have this way of trying to do and be everything for everyone and we often forget about ourselves along the way. You can’t follow a career path that you aren’t interested in for your parents, force yourself into dating when you’re not feeling it, and I don’t think you can be the best version of yourself in any relationship (romantic or parent/child) if you’re not happy. I know there isn’t always time to do everything you want, but make sure you’re doing something that fulfills you.

You Should Be Your Best Self

I know people who have let their parents and friends have too much power. Whether it’s control or the ability to really effect them with their opinions. Giving others that kind of control will weigh you down and this might sound like a stretch, but your day-to-day interactions with others will be effected. In your 20s/30s, this can really effect friendships and romantic relationships. I don’t think it’s possible to be your best self, or choose / attract the right person when you’re not your best self. I’ve let friends and family have way too much power over my happiness and in the end, had to separate myself from those negative relationships in order to become a happier and more confident person.

I was not supported in my “alternative” career choice but giving up wasn’t an option for me. Was it hard not feeling supported? Did it suck being told (quite literally) that I’d never amount to anything? Yes. Yes it did. But I started over in Chicago, launched and grew a business, grew my blog, and created a life I love. One that I’m proud of. Is it perfect? No, but nothing ever is. Looking back, I know that each step – even the ones that didn’t work out – got me to where I was supposed to be. I have had my share of struggles along the way and still struggle now, but I’m happy because I did what felt right for me.

It doesn’t need to be perfect

I’ve had jobs (and bosses) that I’ve hated. Ones that have left me in tears (in my car) every day after work. My first blog/graphic design company didn’t exactly work out. But – it was a stepping stone that got me to Chicago and enabled me to launch The Everygirl. I’ve chosen apartments or parts of town I didn’t love as much as others and dated guys that couldn’t have been more wrong for me. I got married at an age some would consider “late” (my 20-something self included). But here’s the thing. It’s so easy to question every move when things fall apart, but with anything, life won’t be perfect. At the end of the day, if you’re living for you, those rough patches will be easier to get through.

I have learned that the unexpected things in life are usually the best. Living for other people’s expectations will not fulfill you. Maybe it’s it’s the random job opportunity that you’re debating saying yes to. Or the animal adoption drive with the broken legged chihuahua you couldn’t walk away from (even though you don’t like Chihuahuas). The cross-country move to the city where you didn’t know anyone, and drinks with that guy on Tinder. Ok so there were a few Tindermen but I did marry one of them.

Most of the big decisions I made were made on my own, in spite of people in my life thinking I was maybe being a little irrational. Had I followed the path laid out in front of me, I’d be working in insurance (nothing wrong with that but it’s not what I wanted) and living in LA.

Remember That You Are Enough

One of the most common issues readers seem to face is not feeling like they are enough. There’s so much pressure to “figure it all out” ASAP. All of us. Even those of us who seem like we have this life thing figured out do not. We’re all in this together. It’s so important to remember that only you can decide who you are, and that there isn’t one life event or person that will make your life feel perfect. So instead of waiting for the next chapter, remember that everyone has their own journey. It’s what makes us unique.

Stop comparing yourself to others and know it’s ok to be different.

My career came together years after the careers of most of my friends. I got married later than most people I know and it wasn’t always easy seeing everyone else move forward. I was like “what about me?” but I got where I needed to go in my own time. I am so grateful for everything I was able to do when I was on my own.

Is this something you struggle with? How to you handle other people’s expectations?

How I’m Taking Control of My…