Mom Talk: Our Bedtime Routine and an 8 Month Sleep Update 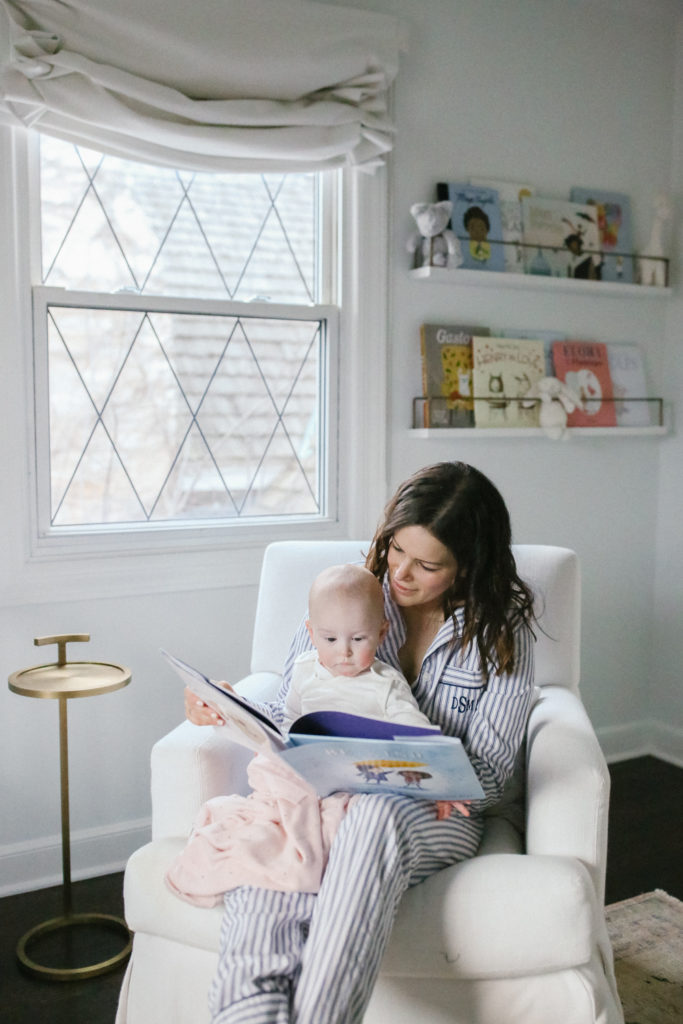 I’ll never forget being pregnant and talking about how I would have my baby sleeping through the night by the time she was 3 months old. “I’ll let her cry it out”, I said. “She’ll be fine”, I said. Mom Danielle is like “sure you will, sweetie” and wants to give pregnant Danielle a pat on the head and wish her the best with her cute little plan. Sleep is the only thing I had a plan in place for so naturally, it was the complete opposite of what I thought it would be. I’m linking up with my friends Julia from Lemon Stripes, Kelly from Kelly in the City, Liz from Hello Adams Family, Emily from Isn’t That Charming, Eva from Happily Eva After and Liz from Pure Joy Home to talk about how we all handle sleep with our little ones. I’m the newest mom here but we went through a lot with sleep and even though it’s still not perfect, we have made so much progress and are in a really good place. I obviously don’t have as much to share as a mom with toddlers but I hope our story will help other new(ish) moms or moms to be feel less alone. Today, I’m going to share our sleep journey, what worked, what didn’t work, our nighttime routine, and where we are now.

Let’s start with how I prepared to get Margot sleeping thorough the night. I read Bringing up Bebe (the only book on motherhood I’ve read thus far) and applied “le pause” giving her a minute to self soothe at night. The first month felt pretty easy. We were on a cloud and so in love. Months 2-6 (or so) were really, really hard for us. Margot went through a very fussy period – so much that taking her out alone was something I couldn’t do. She cried a lot – to the point that she’d throw up all over herself – and we’re not sure if it was colic or reflux because the doctors never really confirmed anything. I knew how lucky we were to have a healthy baby but not being able to soothe her after 1-2 hours of screaming felt awful. It was dark and isolating and I felt like I was failing her night after night. We dreaded bedtime and had some really tough moments. There was a lot of comparing who did what which we knew not to do, but months of no sleep take a toll on you. Ultimately, we were in it together every single night and we’ve come out happier and stronger, and so in love with our sweet girl. We talked about everything before I wrote this post and looking back, we both think the SNOO was a crutch, and probably won’t use it again. She was unable to sleep without it, and we would want our next baby (nope, not pregnant) to be able to sleep without being rocked. We tried everything except CIO (cry it out) because the screaming would escalate very quickly and then she’d throw up everywhere – something that I was not ok with. The routine, the white noise, and the sleep coach – nothing worked. None of it. Everyone kept telling me it would get better and they were right. It’s better than I ever could have imagined. At around 6.5-7 months, a switch flipped. Margot magically stopped crying before bed. We weren’t doing anything differently. She was just ready / felt better. Once she started going to bed more easily, we were able to give her a chance to self soothe at night. I was fine letting her fuss for a while but never let her get too worked up. Margot is now down to 2 naps a day and is usually awake 2.5-3 hours before bedtime, which usually ranges from 6:30-7:30 depending on the length of her last nap. Our routine has always been bath, lotion and PJs, books, bottle, and bed, which we start about 40 minutes before bedtime. It is advised to stick to an eat play nap schedule but Margot is rarely hungry when she first wakes up (even after sleeping 12 hours) so I let that go really early on. We’ve been able to get her to have some food after waking up but she’s just not a big post-nap/sleep eater. I am almost (almost) grateful that we went through what we did because we are both so appreciative of how different things are now. Every single day I look at her and I’m not only grateful that she’s healthy, but that she’s happy, too. If she’s awake, she’s happy. She sleeps through the night most nights but teething has thrown us for a bit of a loop, so she will wake up once, need to be rocked or have a bottle, and go back to bed until 7. One wake-up feels like NOTHING to us.

Here’s what we used and what did/did not work for us.

SNOO: I have such mixed thoughts on the SNOO. In the beginning, it helped rock Margot to sleep and I thought it was the best, but travel was horrible because she was so used to constant movement. I am not pregnant but I don’t think we’ll use it on a second baby if we have one.

Magic Sleepsuit: We used this for a little while but I heard some very mixed things about it (bad for baby’s hips) and Margot’s inability to move made me so uncomfortable, so I would not use this again. I was also really nervous to transition her out of it, so I’d probably do that earlier as well.

Wearable sleep blankets: I highly recommend having at least two of these. Margot looks so sweet and snuggly in it, and it’s the safest way to have a “blanket” in the crib with baby.

White noise machine: A must to help baby sleep at home or on the go. Blocks out all noise (including barking dogs).

Nightlight: This also works as a sound machine but we strictly use it as a soft, dim light that you’re able to turn on by tapping anywhere (or with your phone, but I haven’t used that feature). Love this little thing.

Nanit (monitor): I can’t remember if I registered for a monitor, but I didn’t end up getting one and after doing a little research, decided to invest in the Nanit. I knew I didn’t want to have to carry a monitor base around the house, and I love that it connects to both our phones as well as the nanny’s phone. We also keep an iPad in the kitchen with the monitor streaming there.

I don’t want to scare soon-to-be parents or new parents with fussy babies. Most of my friends didn’t go through this and even though it felt never-ending at the time, she’d eventually pass out in my arms and my heart would melt into a puddle. If your baby has issues you’re worried about, talk to your doctor. I took Margot in a few times but in our case, we had to wait it out. It all feels like a distant memory now and it’s all so much better than we ever could have imagined. Bedtime is peaceful which is all I ever wanted for Margot. She’s healthy and happy – I couldn’t ask for more.

1 Year of Motherhood: Your Questions…

Baby Checklist: What You Need the…

Weekend Reading: What’s New in my Home and Closet