The First Year as a Mom of Two 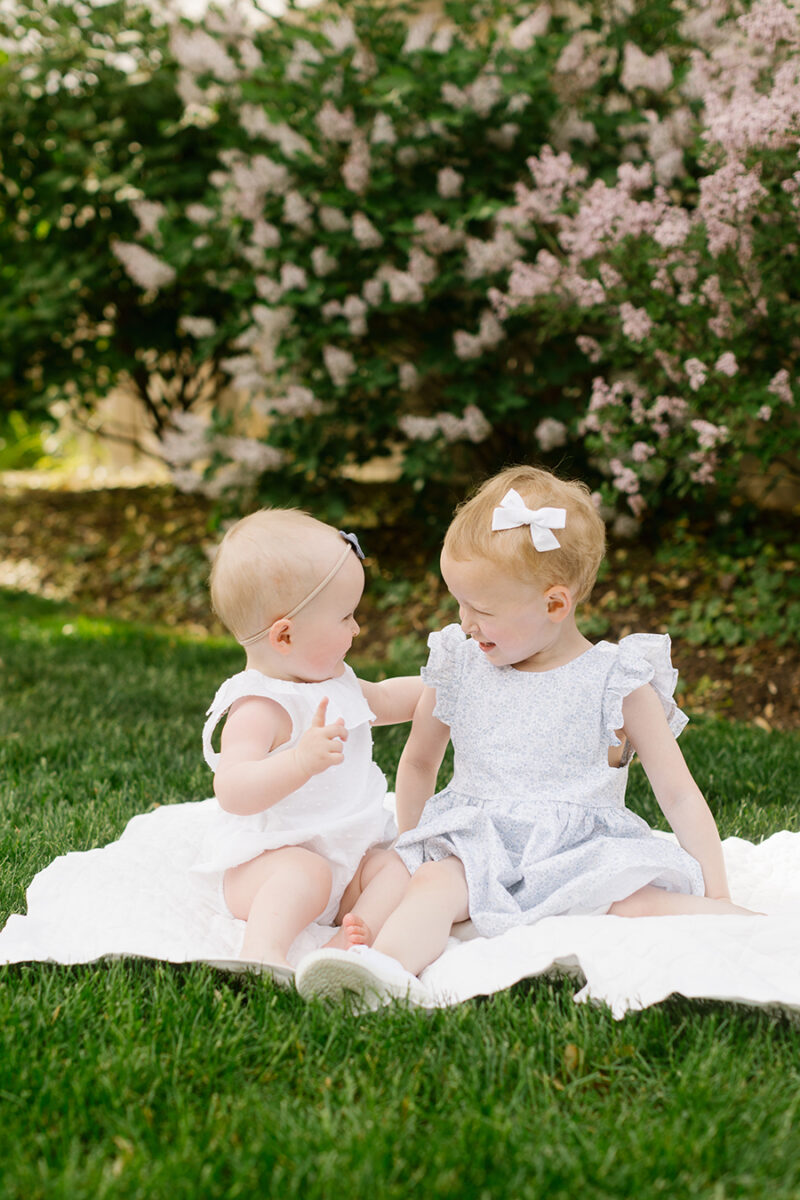 I am almost one year into being a mom of two. And I finally feel like I’m in a place where I can talk about the transition. The beginning is a lot, but for me, was easier than going from 0 to 1. One year later, it feels so much easier. So here’s my experience of the first year as a mom of two.

The First Year as a Mom of Two

The lessons I learned transitioning from 1 to 2 kids

First, it has to be said that we had some unusual circumstances that understandably made the year harder. I’m going to do my best to leave those out in an effort to keep things relatable. Kate was born during the height of a global pandemic just six weeks after Margot was diagnosed with Leukemia. It is never my goal to make other moms feel like it should be easier because they “had it easier.” I don’t want to minimize someone else’s experience. We all have our own unique set of circumstances. Your hard isn’t the same as my hard, and that’s ok. Parenthood is not easy. Period. 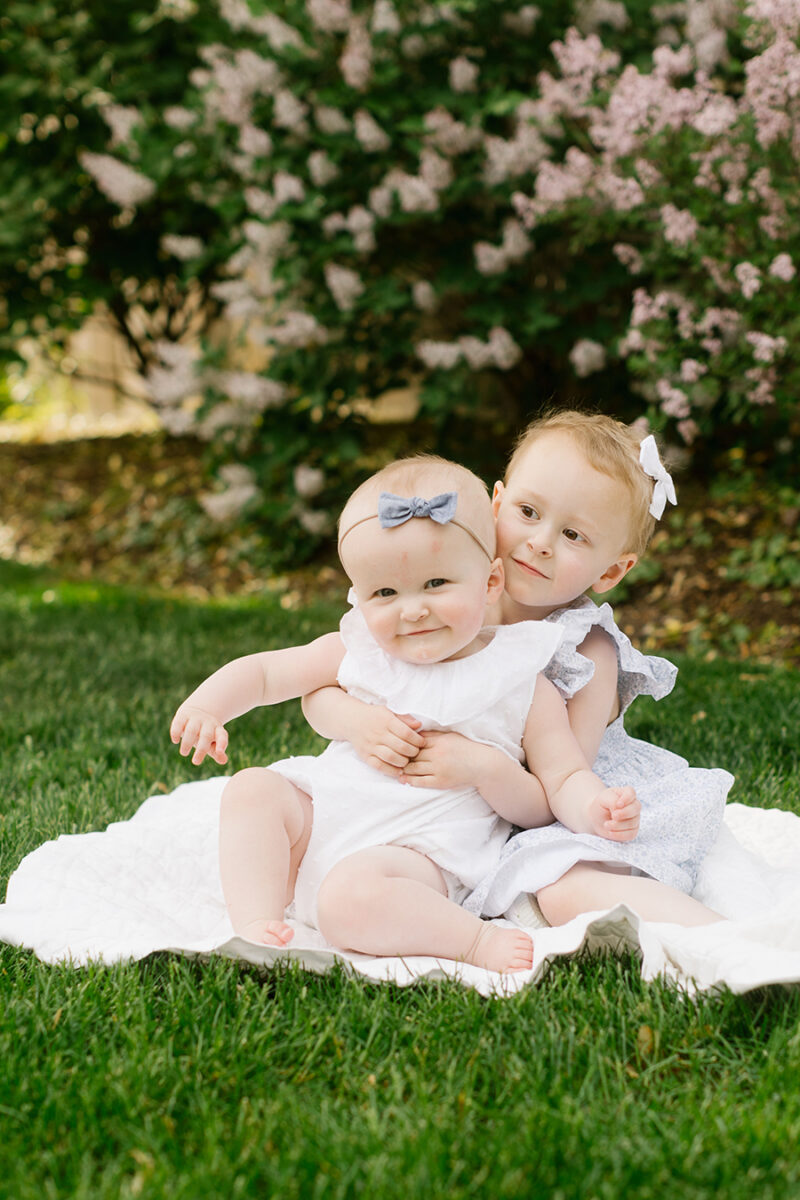 On going from zero to one vs. one to two

The the transition from one to two was much easier than zero to one. I had done it before, was used to my time not fully being my own, and wasn’t always anxious because I knew I could do it. From vaccines to crying it out, everything felt like less of a big deal because it was.

My first year of motherhood was difficult.

No longer being able to do what I wanted was a shift. Margot was a really fussy baby who hated the car, so I found myself stuck at home a lot. It was very isolating. She didn’t sleep through the night for most of her first year. I was exhausted and my anxiety was through the roof. When Margot was three months old, we hired a nanny and I went back to work full-time. I wasn’t ready and it honestly felt like too much. Work stressed me out, I was so tired, and I was really anxious. She ended up being a total dream as a toddler – tantrums are extremely rare and short when they happen. If you’re struggling with a “difficult” baby, know things can change.

Being a mom to two got easier

The first few months are HARD

Even though Kate has always been a pretty easy going and happy baby, those first few months are still tough. Sleep-deprivation and no time to yourself because there’s still another child to look after. I was anxious the first few times we took Kate anywhere and was quickly reminded that our girls are so different – I’ve gotten a lot better about that. She is always smiling, calms quickly when she fusses (which is rare), and has been sleeping through the night for the last eight months.

All our experiences are different, but for me, the transition from one to two was better than expected.

The mom guilt is very real and in my case, it was magnified. I couldn’t really say no to Margot but there were times Kate had to be fed or I just wanted to hold her.  Conor and I would trade off clinic days so I could occasionally get some time with Kate and I wore her for most of her naps the first few months. It’s different because you want and need to make sure your first feels like you’re still very present, and you want to be there for them, but also want to enjoy your newborn. Margot and I had a lot of snuggle time, and whenever she needed me, I was there for her.

This is a personal topic and such a struggle for so many women, but I stopped breastfeeding Kate at 3 months and even then, we had been supplementing with formula, so I was able to devote even more time to Margot pretty early on. My husband was extremely present during this time – we were both there to get Margot through treatment and things felt scary with the pandemic, so I wasn’t alone with the girls very often.

When it gets easier

Having a baby and toddler is hard, but for me, having one fussy baby that didn’t sleep well was harder than a sweet little toddler and easy baby. There’s also a big difference in the day-to-day with a newborn and toddler vs an almost one year old and a toddler. Things started to feel a lot more manageable when Kate started taking steady naps around six months, but it feels a lot more fun and easier now. It took her some time before she was really good at putting herself to bed and elongating those naps, which was also a challenge.

Babies eat nonstop and need to be held – and we want to hold them but also want to care for our first baby. Toddlers don’t like sharing mom, so the emotions are all over the place for everyone. These days, she laughs, plays with her big sister, and they have a sweet little relationship that will continue to get better. It’s a lot, someone always needs something, and I’m tired, but it’s so much more fun than it was.

When Kate was really little, I’d just put her in a solly wrap and play with Margot, and for the most part, she was kind of along for the ride. I definitely prefer life with two now that she’s crawling, playing, and will stand at a play table with Margot. I’ve also become so much more confident as a mom. Packing to go out for a few hours is easier – everything’s easier. I’ve really learned to simplify and feel a lot less anxious than I used to. I’d say that for me, I started to feel more confident and like I was in a groove with the girls when Kate was around ten moths.

Margot took a total of two naps the month of April but had since started napping again, so that’s been great. When she sleeps it’s for about three hours so that’s a huge break for us. Kate takes two naps a day and sleeps for anywhere from 45-80 minutes. It isn’t often that the girls sleep for an hour at the same time but when they do, it’s amazing.

Kate’s naps were so short until about 5-6 months – that was hard. I was only able to hold her for naps when Conor was home which he often was because of the pandemic. She slept so poorly on her own which is normal, but again, a huge challenge with a toddler. I wore her a lot.

Bedtime isn’t too complicated once baby #2 is on a schedule and going down easily. Kate goes to sleep at 6:30 and Margot goes to bed around 7:30, so there’s no putting two people to bed at once which I think makes things easier. The girls take baths every other night during winter nightly during summer (because of sunscreen and being outside). We do dinner at around 5:00, baths at 5:45, and then bottle, books, and bed for Kate. Conor and I alternate being with the girls, so whoever has Margot gets her ready and we’ll usually do a little snuggle and show in bed, or books. We’re both almost always home, and the one time Conor wasn’t, I let Margot watch a show on my bed while I put Kate down.

Hiring our nanny in April was a game-changer. She’s here four days a week and has given me time to work, work out, get things done around the house. I am able to get some quality time in with the girls, too. I feel so much more “balance” in this role – I’m able to work, exercise, and take care of myself. Conor and I are trying to get some day dates in during those hours, too.

Now that we’re almost a year in (just two more weeks!) things feel pretty good. I feel like I have a decent groove with our two girls. I think it will continue to get better as Kate becomes more of a little person.

It goes by so quickly

Even easy newborns are a lot of work and the days feel long. Before you know it, they’re almost one and then poof: they’re about to turn three. I try to remember that this is just a moment in time. It is nonstop – no time to rest, nap, clean, shower etc. I was used to life as a mom when I had my second. It was less of a shock to the system. And this is what life is right now. There’s less time to relax and the most insane amount of laundry. But there’s also less worry and more joy than I ever could have imagined.

The Unexpected Ways Motherhood Changed Me

Postpartum Recovery and the Essentials I…